Argo is an international program that measures water properties across the world’s ocean using a fleet of robotic instruments that drift with the ocean currents and move up and down between the surface and a mid-water level.  Each instrument (float) spends almost all its life below the surface.  The name Argo was chosen because the array of floats works in partnership with the Jason earth observing satellites that measure the shape of the ocean surface.  (In Greek mythology Jason sailed on his ship the Argo in search of the golden fleece).

What are its aims?

The data that Argo collects describes the temperature and salinity of the water and some of the floats measure other properties that describe the biology/chemistry of the ocean.  The main reason for collecting these data is to help us understand the oceans’ role in earth’s climate and so be able to make improved estimates of how it will change in the future.

For example, the changes in sea level (once the tides are averaged out) depend partly on the melting of icecaps and partly on the amount of heat stored in the oceans.  Argo’s temperature measurements allow us to calculate how much heat is stored and to monitor from year to year how the distribution of heat changes with depth and from area to area. As ocean heat content increases, sea level rises, just like the mercury in a thermometer. Comparison of Argo’s measurements with the Jason observations continue to give us new insights into how the oceans “work” that can be used to improve climate models.

At present (2020) Argo is collecting 12,000 data profiles each month (400 a day).  This greatly exceeds the amount of data that can be collected from below the ocean surface by any other method. Argo plans to continue its data collection for as long as those data remain a vital tool for a wide range of ocean applications of which understanding and predicting climate change is but one.

How does it work? 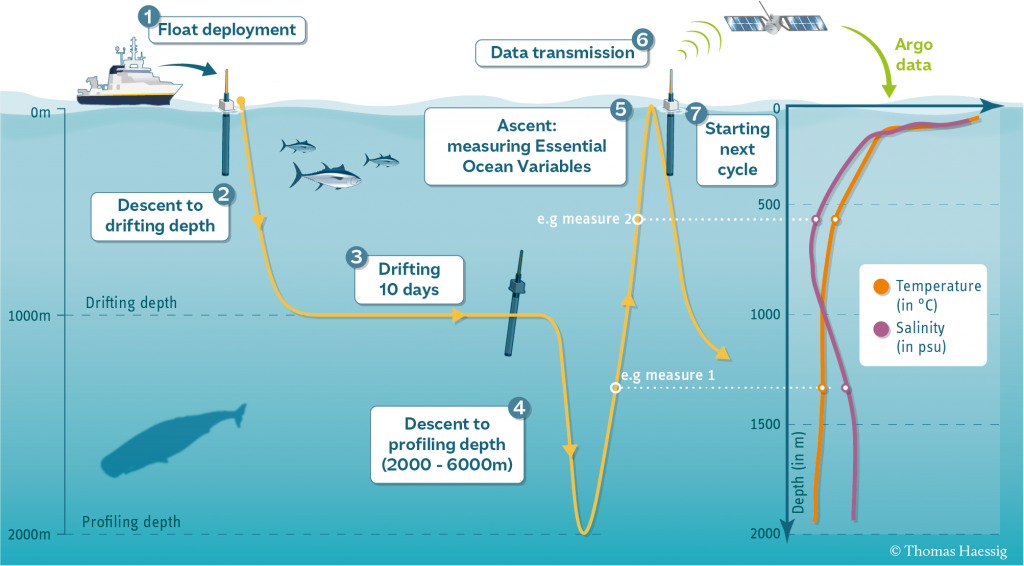 Each Argo float (costing between $20,000 and $150,000 depending on the individual float’s technical specification) is launched from a ship.  The float’s weight is carefully adjusted so that, as it sinks, it eventually stabilizes at a pre-set level, usually 1 km. Ten days later, an internal battery-driven pump transfers oil between a reservoir inside the float and an external bladder.  This makes the float first descend to 2km and then return to the surface measuring ocean properties as it rises.  The data and the float position are relayed to satellites and then on to receiving stations on shore. The float then sinks again to repeat the 10 day cycle until its batteries are exhausted.

To learn more about floats and their cycle, click here.

The float measurements are sent to regional data centres where they are given rigorous quality checks and then passed to two global data centres from where they can be accessed by anyone wishing to use them.  Some users have applications that require rapid access and so Argo aims for most “real-time” data to be available within 12 hrs.  Other applications need a higher-quality version that replaces the real-time data after lengthy comparisons between nearby floats and between float data and information from research ships.  A fundamental rule for Argo is that all data are freely and openly available.

Argo data are stored in data files that first must be decoded before being readable.  To address this difficulty for non-experts, several websites and web applications have been developed to showcase and interact with Argo data and metadata without having to understand how to decode it.

To learn more about the available data visualizations, click here.

There is no central funding for Argo.  Each of the 30 countries that operate floats obtains their own national funding to buy floats, prepare and launch them and to process and distribute the data. The Argo Program is managed by teams of scientists and data experts who ensure that the program is run as efficiently and effectively as possible and that standards are maintained at the highest possible level.  Argo is part of the Global Ocean and Global Climate Observing Systems.  The total annual cost of Argo is estimated at $40million each year.

To learn more about the organization of Argo, click here. 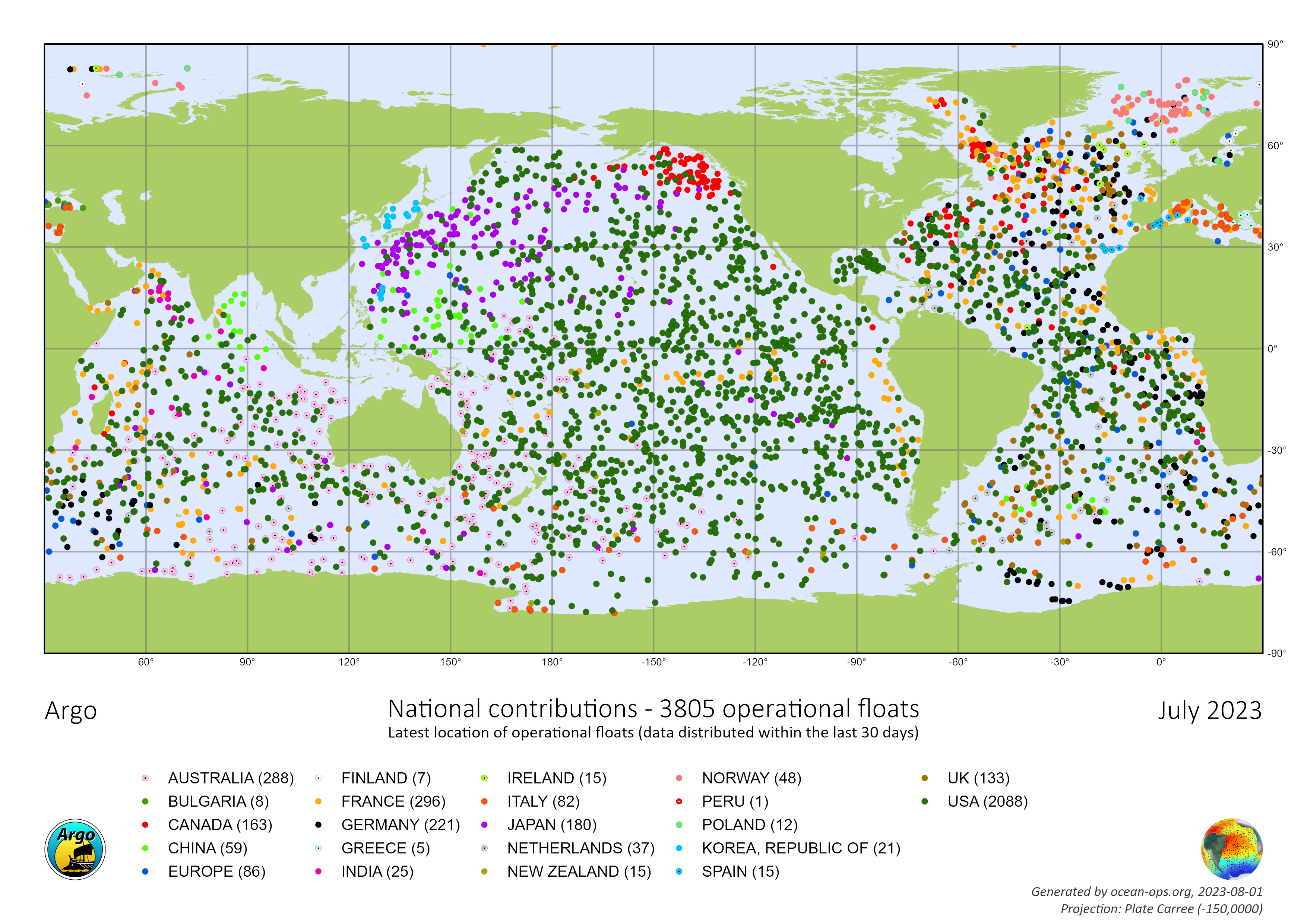 A Deep SOLO float courtesy of Scripps Institution of Oceanography

Profiling floats similar to those used by Argo were first developed in the late 1990s. Float design has continuously incorporated new technologies to improve battery performance, satellite communication and sensor stability. It has also had to keep track of changing demands made on Argo by scientists and by operational weather and climate forecasting centres. Because floats spend almost of their life (which may be as long as 10 years) below the ocean surface and are unable to communicate, the technological challenge of Argo is in many ways greater than that of space science.  Floats are manufactured by commercial companies and by research institutions but all must maintain common and high standards set by the international steering team.  Since Argo started in 2000, innovative new float designs have allowed floats to profile deeper, to work in ice-covered regions and to measure other ocean properties beyond the basic salinity temperature and pressure.

All techniques used to obtain information about our environment come with some impact and Argo is no exception.  However, its impact is small and both the float manufacturers and Argo scientists are always looking for ways to reduce that impact.  The vast majority of floats fail when their batteries are exhausted and they continue to drift at depth until they eventually leak and sink to the seabed.  A few fail at the surface and eventually drift to shore where they may be recovered. 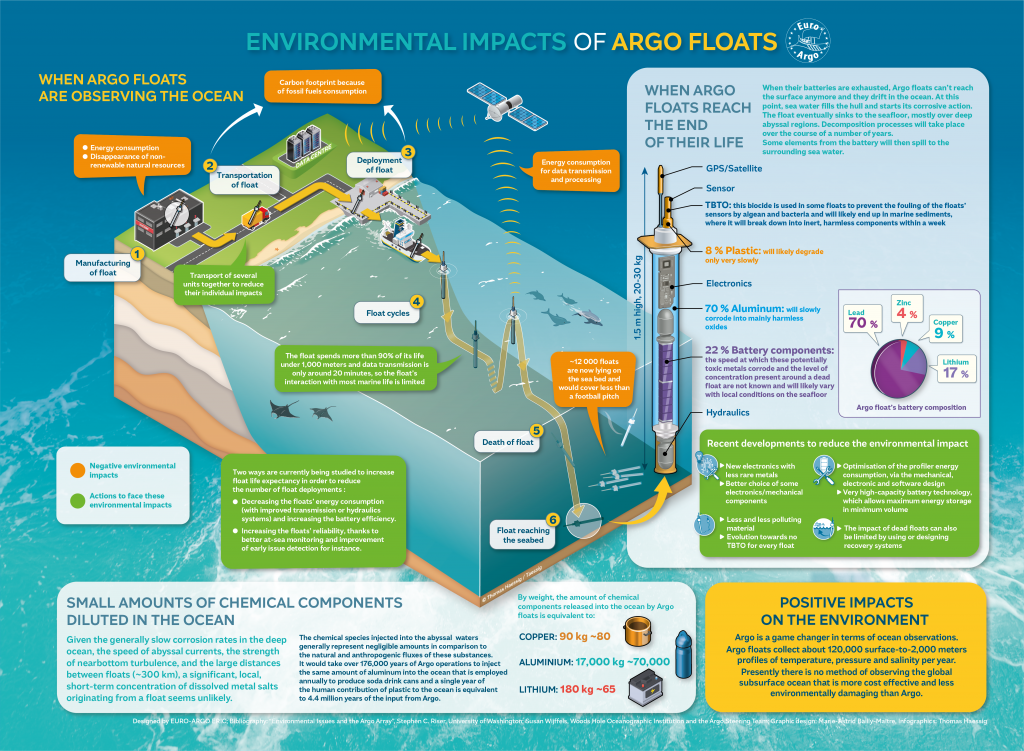 All deployed floats are considered expendable since the cost and environmental impact of sending ships to find and recover them would be enormous.  Each year the floats that fail add 90kg of copper, 45kg of zinc, 180kg of lithium, 180 kg of lead and 17 tons of aluminum to the ocean.  All these elements occur naturally in all oceans.  The only non-natural annual contributions from “dead” floats are 1.8 tons of plastic, and 9kg of the chemical tributyl tin oxide (TBTO) without which salinity measurements cannot be made to the required accuracy.  As a comparison, it is estimated that hundreds up to ten thousand containers are lost off ships each year.  If 200 containers are lost, with the capacity of holding 60,000 lbs, that would contribute 6,000 tons of garbage each year into the ocean compared to Argo’s less than 2 tons per year.

What has Argo delivered? 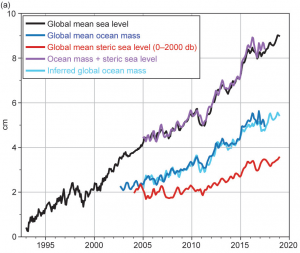 Argo has been described by New York Times science writer Justin Gillis as “one of the scientific triumphs of the age”. The triumphs have been technological and scientific.  The free access to Argo data means that there is wide usage – over 4000 scientific publications have referred to or used Argo data as have 350 PhD theses.  To learn more, click here.

Two science outcomes are worth highlighting.  Argo has greatly reduced the uncertainty of global heat storage estimates and hence projections of sea level rise.  The changes in salinity monitored by Argo also allow changes in global rainfall patterns to be studied. Finally, the ready access to the data provides an educational resource to give the general public an ability to look inside the ocean.

To learn more about Argo’s contributions to science, click here or here for a more in-depth look.

Click here to learn how Argo’s 20 years of observations have revolutionized the way scientist learn about the ocean.