Argo and the ocean observing system

Argo is part of the Global Climate Observing System and Global Ocean Observing System OceanView (GCOS, GOOS).  In addition, Argo contributes to the WCRP‘s Climate Variability and Predictability Experiment (CLIVAR) project whose mission is to enable a better understanding of climate to the benefit of society and the environment in which we live.  Argo also is a major contributor to the Global Ocean Data Assimilation Experiment (GODAE OceanPredict) whose mission is to improve global and regional ocean analysis and forecasting systems.

Together, the Argo and Jason satellite altimeter data sets are assimilated into computer models developed by GODAE OceanPredict which improves our ability to forecast ocean climate. For the first time, the physical state of the upper ocean is being systematically measured and the data assimilated in near real-time into computer models.  Argo builds on other upper-ocean ocean observing networks, extending their coverage in space and time, their depth range and accuracy, and enhancing them through the addition of salinity and velocity measurements.  Argo is not confined to major shipping routes which can vary with season as the other upper-ocean observing networks are. Instead, the global array of 4,000 floats is distributed roughly every 3 degrees (300km) and observes the ocean year round. Argo is the sole source of global subsurface datasets used in all ocean data assimilation models and reanalyses.

CTD cast from a ship 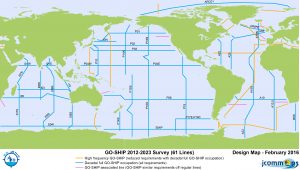 Even with Argo profiles covering more area year round, data from ship-based CTDs is still vital because it is extremely accurate and goes all the way to the bottom of the ocean.  This ship-based CTD data is used to calibrate all Argo data, especially biogeochemical and deeper Argo data, as well as sensors in development.

The World Ocean Circulation Experiment (WOCE) was an attempt in the 1990’s to systematically collect 30,000 global ship-based CTDs.  The follow up to that experiment is GO-SHIP which officially began in 2007 and continues to collect high quality CTD data along 61 lines repeated each decade as shown in the map to the right.

Argo and the World Ocean Database 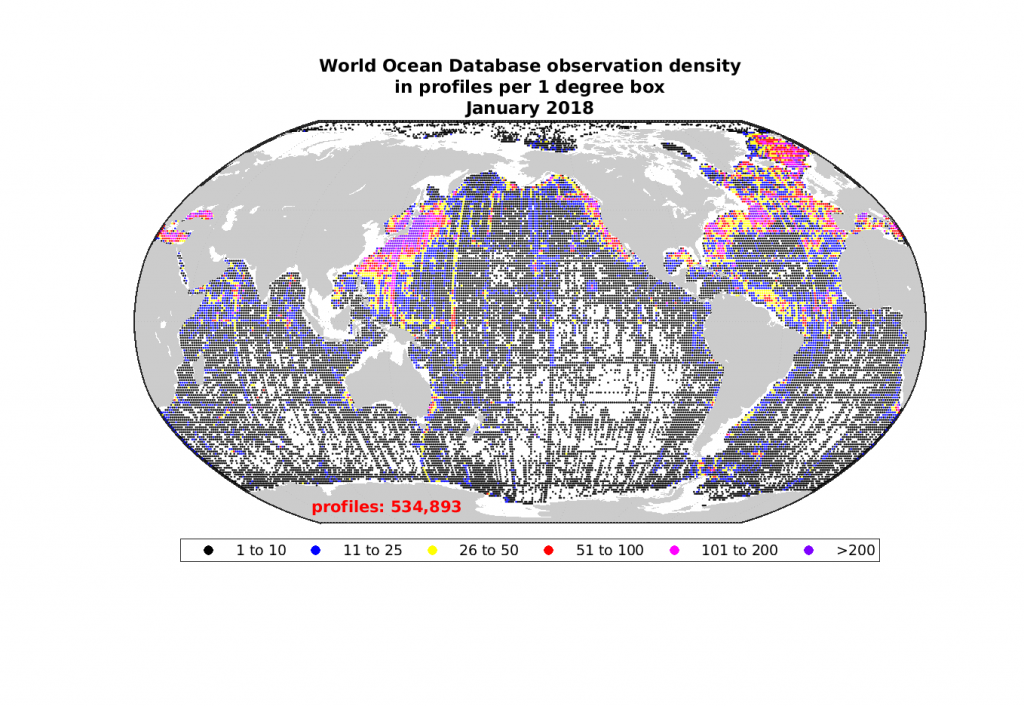