Argo data are now the most abundant source of underwater temperature, salinity and pressure profiles in the ocean.  This data help scientists understand how the physical state of the ocean is changing over time.  Deep Argo profiles now go all the way to the ocean floor which will help further our understanding of ocean warming and the movement of water around the world.  The biogeochemical data coming from BGC Argo pilot program will help scientists monitor and manage the ocean resources, the carbon cycle, ocean acidification and ocean color.  This page will highlight recent figures and blurbs from key scientific papers using Argo data with the most recent at the top.  To learn more about how Argo data is helping understand global phenomenon like sea level rise, ocean heat content and warming, ocean circulation and the water cycle, click here. 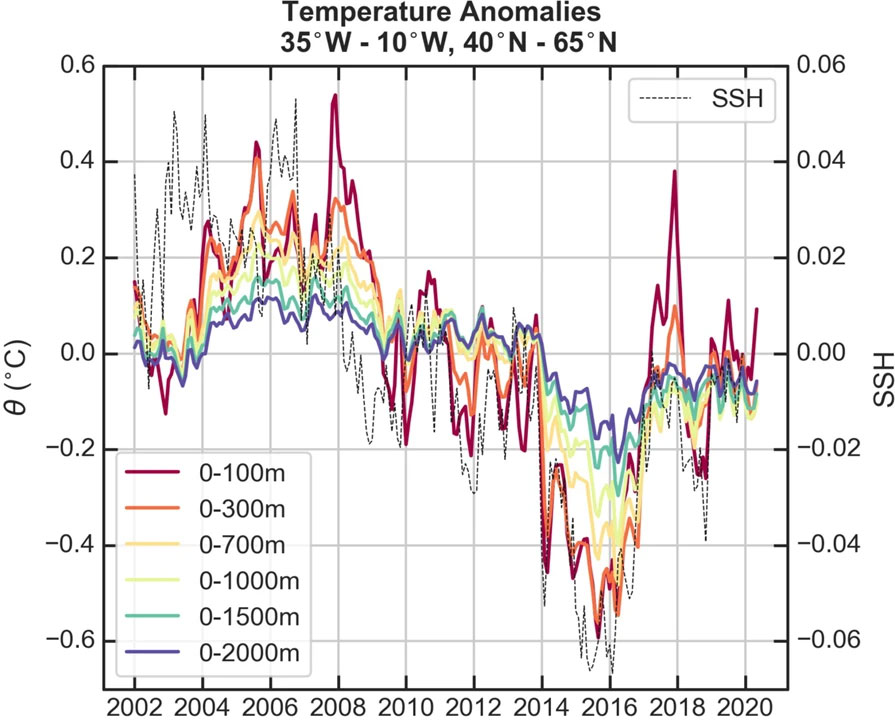 The Subpolar North Atlantic is known for rapid reversals of decadal temperature trends, with ramifications encompassing the large-scale meridional overturning and gyre circulations, Arctic heat and mass balances, or extreme continental weather. Since 2016, Argo profiling floats are measuring a warming trend over a large area encompassing the Iceland Basin, the Iberian plain, and the eastern Newfoundland basin. This warming, which abruptly interrupted a decade-long cooling of the region, was shown to result from an ocean circulation shift that enhanced the northeastward penetration of warm and saline waters from the western subtropics. This mechanism was evidenced through altimetry-based tracer experiments, but also via a machine learning algorithm built upon a statistical unsupervised classification of Argo profiles. In particular, a Profile Classification Model was used objectively to distinguish the vertical structures of (homogeneous) subpolar and (stratified) subtropical water masses, before inferring their respective spatial distribution within the subpolar basins on an interannual basis.

What is Deep Argo telling us about the waters in the Southwest Pacific Ocean? 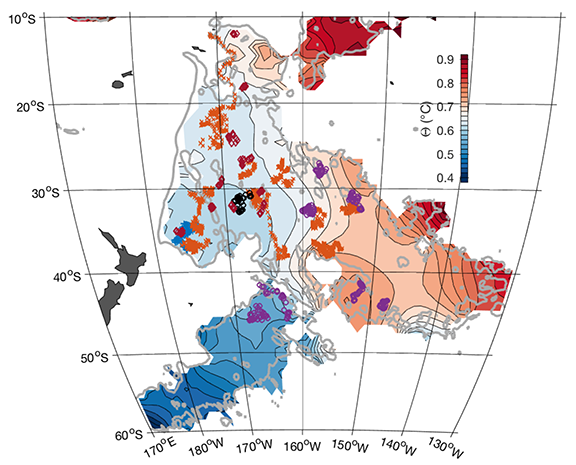 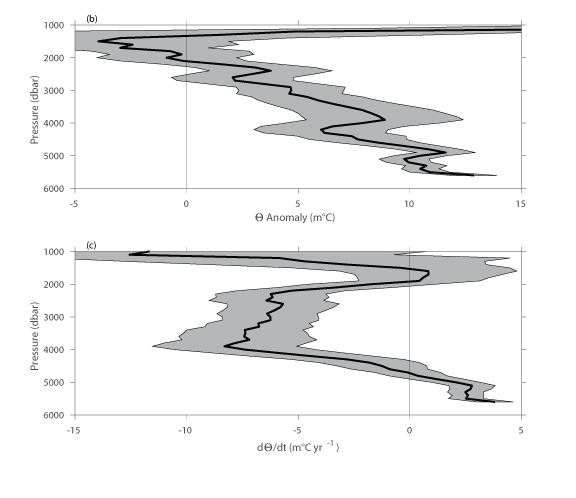 The first regional pilot array of Deep Argo floats profiling from the sea floor to the sea surface was deployed in the Southwest Pacific Basin, starting with a few floats in 2014, and commencing in earnest in 2016. An analysis of the data from these floats (Johnson et al., 2019) revealed that the circa 2017 float temperature anomalies relative to the World Ocean Atlas 2018 (WOA-18) long-term (1955–2017) climatology in the basin were statistically significantly and increasingly warm from 2800 dbar to the sea floor, reaching 11 (±1) m°C by 5500 dbar (Fig., top panel). Furthermore, the average warming rate estimated from Deep Argo temperature anomalies was about 3 (±1) m°C yr-1 from 5000 to 5600 dbar and from 2014 to 2018 (Fig., bottom panel). This warming trend in the bottom water, which spreads northward from its origins around Antarctica, has been documented using data from research cruises at about 1 m°C yr-1 from the 1990s to the 2000s, and about 2 m°C yr-1 from the 2000s to the 2010s (Purkey et al., 2019). The estimate of 3 m°C yr1 from 2018 to 2018 using Deep Argo data suggests a further acceleration of this signal. Building out this and similar Deep Argo pilot arrays into a global array would allow monitoring of abyssal and deep warming below the 2000 dbar sampling limit of standard core Argo floats. This deep ocean warming has been estimated to be approximate 10% of the warming in the climate system (Johnson et al., 2016).

The largest regional pilot array of biogeochemical (BGC) Argo floats was deployed in the Antarctic by the Southern Ocean Carbon and Climate Observations and Modeling (SOCCOM) project. In addition to temperature and salinity, these floats measure oxygen, nitrate, pH, fluorescence, and backscatter. These data have been used to estimate air-sea exchange of carbon dioxide (Gray et al., 2018) and oxygen (Bushinsky et al., 2017), as well as annual net community production (Johnson et al., 2017) and phytoplankton biomass (Haëntjens et al., 2017). One valuable aspect of the BGC Argo data is its ability to relate changes in biogeochemical properties directly to their physical drivers. For example, a recent study used data from these floats to investigate the upper ocean conditions that support the earliest and largest offshore spring phytoplankton bloom in the Southern Ocean (Prend et al., 2019). Float data revealed a close link between biological productivity and seafloor topography. Observations of upper ocean chlorophyll concentration, a proxy for phytoplankton biomass, (right panel) show that the highest values were recorded when the floats were trapped in a recirculating eddy that formed over a seamount (portion of trajectories colored green and enclosed by a red box in the left panel). This is because flow-topography interactions lead to enhanced mixing, which delivers nutrients to the sunlit upper ocean where phytoplankton can grow. Determining the physical processes that regulate biogeochemical cycles, through studies like this, is necessary to improve climate models. Furthermore, given the key role of the ocean in absorbing atmospheric carbon dioxide, increasing the number of ocean biogeochemical measurements through a global BGC Argo array would allow us to better constrain future climate projections.