The array is made up of 30 different countries’ contributions that range from a single float, to the U.S. contribution, which is roughly 50% of the global array. To see how many floats are deployed by each country, look at the Commitments Table.  To learn more about the countries involved, see below.

Funding mechanisms differ widely between counties and involve over 50 research and operational agencies. Each national program has its own priorities but all nations subscribe to the goal of building the global array and to Argo’s open data policy.

There are three Argo missions:  core Argo, BGC Argo and Deep Argo.  Core Argo is the temperature/salinity/pressure operational mission that was the original goal the Argo Program.  BGC Argo measures biogeochemical parameters and is in the pilot phase.  Deep Argo measures the same parameters as core, but profiles are between 4000 and 6000 m and is also in the pilot phase.  Each national program contributes to the Argo missions differently and this will change as the pilot missions become operational.

The program, including the three missions, are overseen by an International Argo Steering Team and a Data Management Team that are comprised of representatives of float-providing countries.  See the figure at the right for a visual of the governance model.  There is now a framework in place for countries that would like to join the Argo Program. 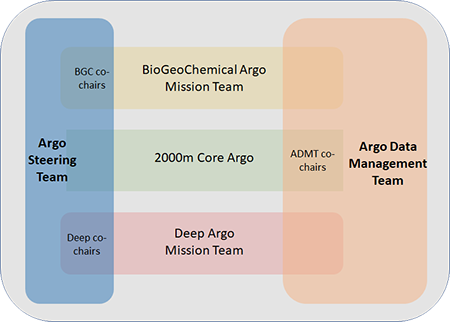 The array’s growth is monitored by the Technical Coordinator at OceanOPS that is located at IFREMER in Brest, France.  OceanOPS is responsible for monitoring and coordinating system for operational ocean observations. There is also an Argo Director.

A primary function of OceanOPS is to implement resolution XX-6 of the Intergovernmental Oceanographic Commission  (IOC) of UNESCO. This resolution states that : “Concerned coastal states must be informed in advance, through appropriate channels, of all deployments of profiling floats which might drift into waters under their jurisdiction, indicating the exact location of such deployments.”

Thus OceanOPS operates a formal deployment notification process and some countries have given formal concurrence for the operation of Argo floats within their Exclusive Economic Zone (EEZ).  The framework now in place allows Argo to grow while complying with IOC rules.