Most operational ocean forecasting centers around the world now rely on Argo data to initialize global and regional forecasts of subsurface properties, because Argo is the most abundant source of subsurface information (temperature, salinity, velocity) for the global ocean. The availability of Argo data in real time lends them to use by operational centers involved in the reanalysis and forecasting of the state of the ocean and of climate in both the short and the long term.  Operational centers use numerical ocean models to understand and predict the properties of the ocean and the ocean’s effect on the weather and climate. 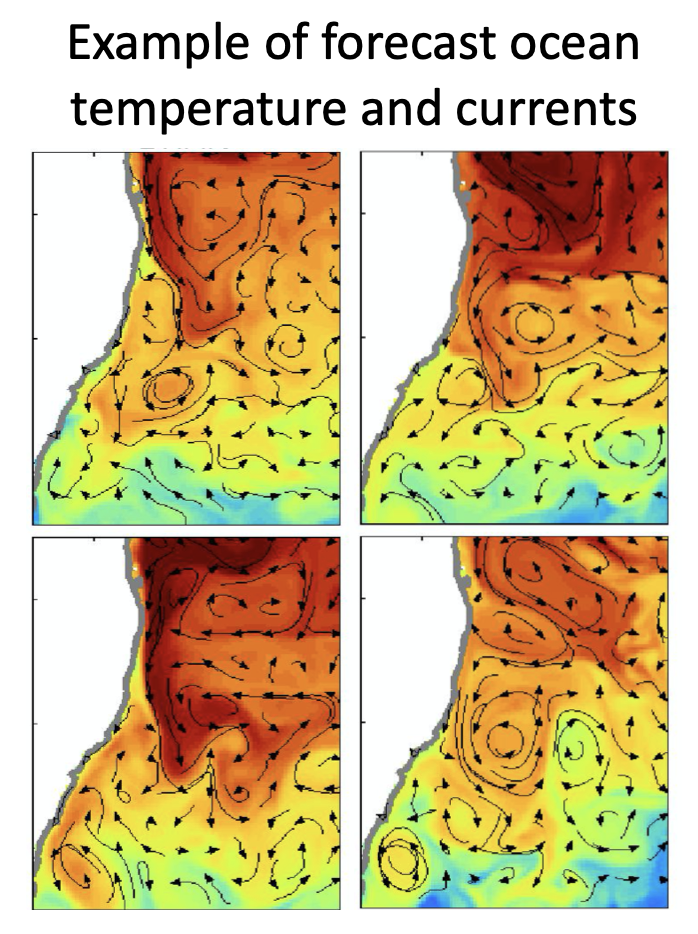 Example of ocean surface temperature and currents from an ocean forecast. Forecasts are publicly available and widely used in various marine industries.

For short-term forecasts, a system is run to predict what will happen tomorrow, or next week? In order to make a short-term forecast, the current state of the ocean must be estimated. Forecasting centers use data assimilation to combine observations with an earlier forecast, to construct the initial conditions of the ocean. A model starts with this forecast, and integrates forward in time, using an ocean model, run on a super-computer. Together with altimetry and satellite SST, Argo is a fundamental dataset that underpins short-range forecasts.

For seasonal prediction, a system is run to estimate what is likely to happen in the coming months, out to 9 months. Such a forecast requires an estimate of the state of the atmosphere-ocean-land, including the ice. Seasonal forecasts usually include many individual forecasts, to capture the uncertainty of predicting over such long time-scales. Argo is the most critical observing system for initialising seasonal forecasts. Argo quantifies the ocean heat content, which is fundamental to forecasting over timescales longer than a few weeks. This is also true for interannual and decadal projections, which seek to anticipate how the earth system is most likely to change over many years.

Short-range forecasts are usually performed every day, while seasonal forecasts are often run weekly. All forecast systems rely on Argo data being available in near-real-time, and at high quality.

Ocean reanalyses provide historical estimates of the state of the ocean, based on models and observations.  Reanalyses are used to underpin a vast array of scientific research – from understanding ocean processes, ocean variability, teleconnections, and extreme, to planning explorations and assessing the feasibility of operations at sea by marine industries. Ocean reanalyses are also routinely used to guide and assess developing versions of forecast systems, prior to them becoming operational. They are often the test-bed for new methods in data assimilation, for assimilation of new data types, and for assessing new models before they are adopted by operational centers.

Example of an analysis of the depth of the 20 degree isotherm in the tropical Pacific Ocean. The analysis field is constructed from Argo data, and is used by scientists and some industry groups to understand the state of the climate (Credit: http://www.bom.gov.au/marine/)

Ocean reanalyses fall into two camps. One camp adopts the same tools as operational forecasts. The goal of this group of experiments is to produce an accurate estimate of the three-dimensional, time-varying ocean circulation. The second camp, involves state-estimation. This group of systems aims to produce estimates of the ocean circulation that are dynamically-consistent. This means that they produce solutions that can be used to understand heat budgets, freshwater exchanges, and often carbon budgets, and so on. State estimation is most commonly used for climate applications, and depends on Argo data to improve estimates of model parameters that are poorly known (e.g., for mixing) and to precisely produce refine forcing fields, such as heat fluxes, that can have significant uncertainty. 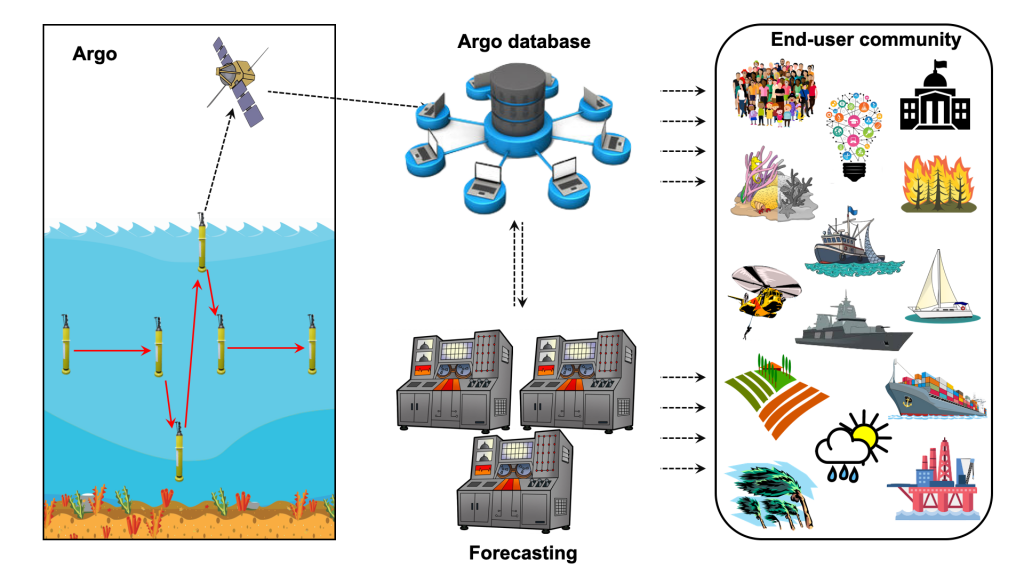 Ocean forecasts, weather forecasts, and seasonal predictions all depend on Argo data, and have a broad community of end users (see the figure to the right). Applications of short-range ocean forecasts – predicting ocean conditions over the next day to ten days – include search and rescue, fisheries, shipping, oil and gas, and military. Applications of seasonal predictions – predicting ocean properties over the next month to nine months – include agriculture, and resource management (e.g., coral reefs).

Weather forecasts are used for a myriad of purposes by the general public, but are also used for all of the applications depicted in the figure, including response to severe weather (e.g., hurricanes) and fires. Not all weather forecasts depend heavily on Argo data yet. But the most advanced centers are finding improved forecast skill, when the ocean and atmosphere are forecast together – with Argo data underpinning the ocean components of those forecast systems. The research community and governments draw on information from all of these forecasting systems to improve their understanding about our world, and to inform policy and decisions.

The following links provide information about many of the operational centers using Argo data.  While, not all yet make full use of Argo’s temperature and salinity profiles, they do cite the data’s abundance, its uniform spatial distribution, the greater depth penetration (than XBTs), the data quality and the availability of salinity information as being beneficial.