Argo is constantly trying to improve its data quality and coverage, which means that some technological challenges need to be addressed to have floats operate well in all parts of the global ocean. Remember that almost all floats are deployed into the ocean and not retrieved and thus the floats must be robust, long-lasting and accurate in a sometimes very harsh marine environment. Read through the different innovations below that have helped Argo improve and expand its coverage.

If floats live for a long time, more profiles can be delivered and fewer floats need to be deployed each year. This helps keep the cost of the Argo Program from growing exponentially each year and reduces the pollution associated with float deployment.  One of the most basic ways of extending float lifetimes is making sure that there is enough battery life inside the floats to power them for years.  When Argo began in the early 2000’s, all floats used alkaline batteries and had a goal float lifetime between  3 – 5 years.  After monitoring technical data sent by floats, it became clear that after about three years, the alkaline batteries ran out of energy. A few alternatives were tested  to improve the battery performance and now most Argo floats are powered by lithium or hybrid batteries. These batteries can cope better with colder conditions and also handle large current demands, like those needed to  startthe float ascent or descent. In addition, more battery packs were added to some float types that use lots of energy, like BGC floats that have 4 to 6 additional sensors. The figure below shows the way that float life expectancy has increased over the years since Argo started. To see more statistics about float lifetimes, explore the Metrics and Key Performance indicators (KPI) sections of the Argo Information Centre website. 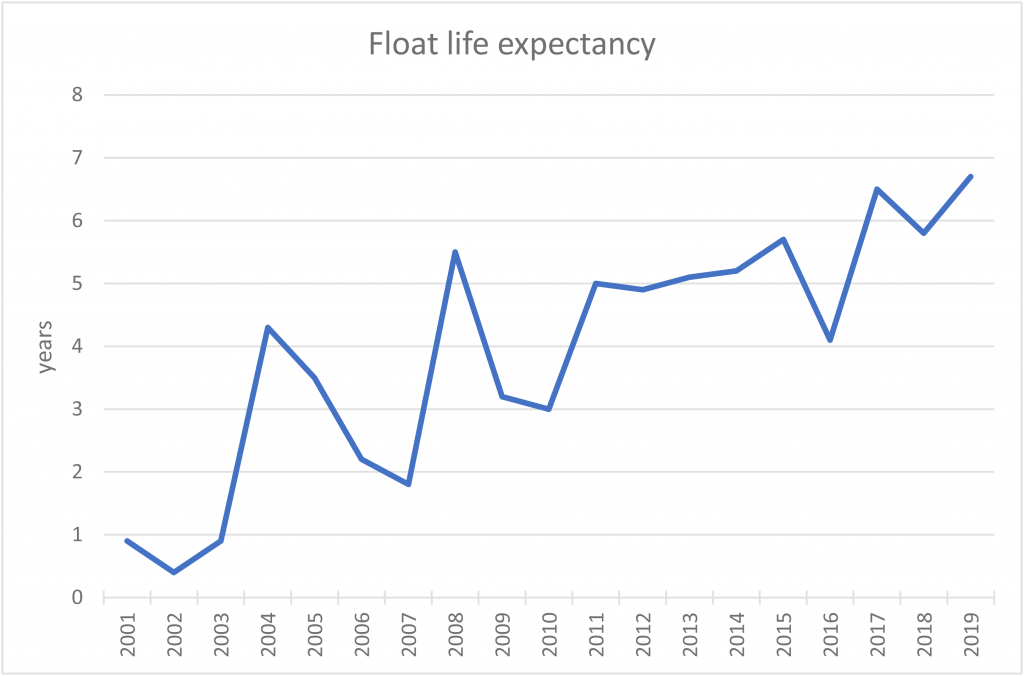 In the beginning of Argo, floats were equipped with Système  Argos transmitters which had low bandwidth and required the floats to be on the surface for many hours in order to upload all their data (up to 18 hours in the tropics). An unfortunate side effect of this in areas that had large surface currents was that the floats could be swept ashore or over areas that were shallower than their 2000 m profile depth. This limited the locations that floats could be deployed and especially made it hard to operate in marginal seas, which often have shallow areas.  However, communications have now improved and most floats use Iridium transmitters, which are high bandwidth and only require the floats to be on the surface for 15 – 30 minutes.  This has greatly reduced floats being washed ashore or lost to grounding (getting stuck on the bottom because the bottom depth is  shallower than 2000m). Another benefit of high speed communications is that much more data can be sent, allowing higher resolution profiles. In addition, float operators can send instructions to the floats to change their mission parameters, which helps to  avoid hazards or  sample upcoming weather events. However,  high speed communication systems do not offer high quality positions, so floats now carry GPS devices which acquired positions are more accurate than those  obtained previously via Système Argos. In turn, more accurate surface positions can lead to more accurate water velocity estimations. To learn more, visit the data transmission systems page. 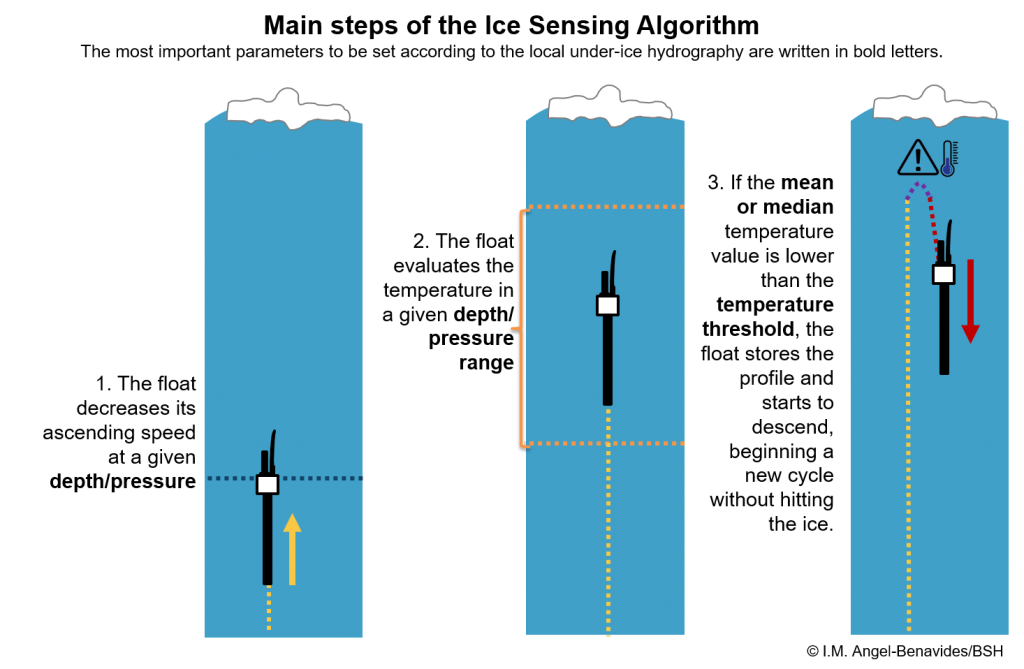 Sea-ice covers large parts of the Southern Ocean and the Arctic Ocean for long periods of the year, making it very difficult to obtain observations of the water underneath the ice. Argo floats are suitable instruments to measure the water properties in the seasonal ice zone, since they can be deployed during the ice-free period and keep operating autonomously throughout the winter. However, the sensors and antenna, which are located at the top of the float, may be damaged if the float hits the bottom of the ice layer in its trajectory towards the surface. Collisions with sea ice can also happen while the float is at the surface for satellite communication. In this case, the float’s hull is also at risk of damage due to lateral pressure if caught between ice floes. To mitigate this risk, Klatt et al., (2007) proposed the use of an Ice Sensing Algorithm for the Weddell Sea in the Southern Ocean, based on the near-freezing temperatures in the upper water column in the presence of the sea ice. Floats equipped with an Ice Sensing Algorithm evaluate the temperature data they measure while approaching to the surface. If the temperature is below a predetermined threshold, indicating that sea ice is expected above, the ascending trajectory is aborted thus preventing the float from hitting the ice from below. The float then proceeds to start another cycle and tries to surface again after 10 days. The process repeats until the float senses it is safe to surface, when it transmits all the profiles taken under ice, which are stored internally on the float.

This ice sensing approach has long been used in the Southern Ocean and it has been recently adapted for the Arctic, overall decreasing the mortality rate of the floats that encounter sea ice. In the Southern Ocean, where the water masses underneath the ice are generally stable and homogeneous, exhibiting temperatures near to freezing point, the use of the algorithm is straightforward. In the Arctic, where the hydrography under the ice is more variable and warm water masses may be present underneath the ice, the use of ice sensing algorithms require that its parameters are locally tuned to reflect the regional sea ice – water temperature relationships. To learn more about floats operating under the ice, see the Polar Argo page.

Going to the ocean floor 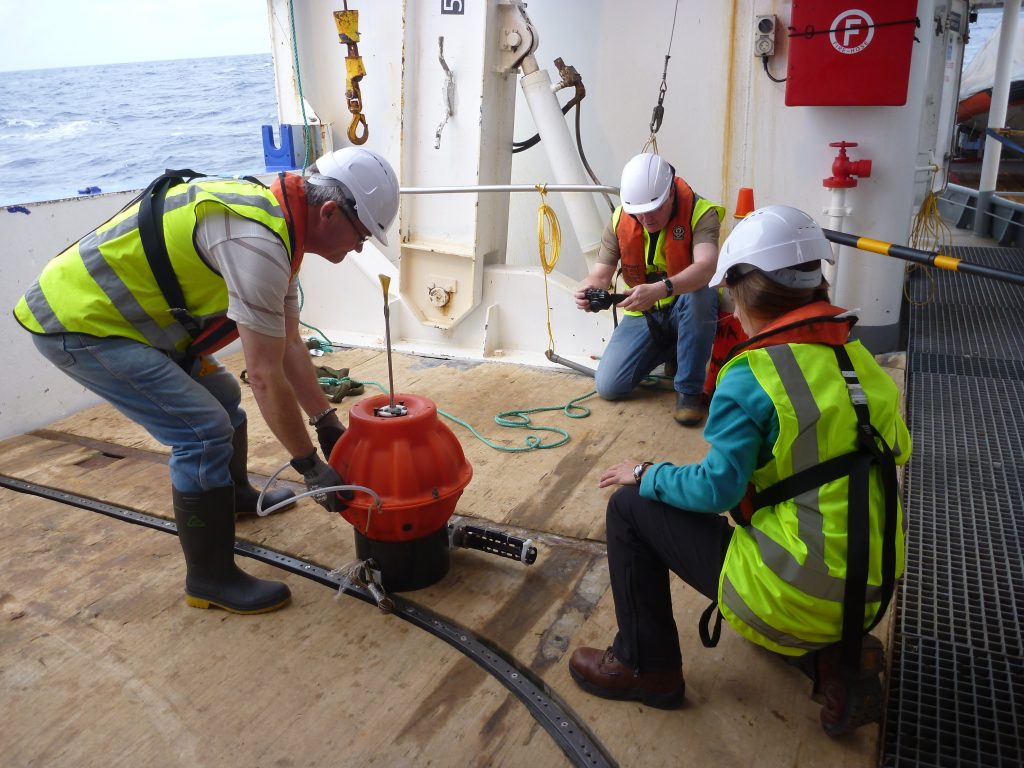 The deeper you go under the ocean’s surface, the higher the pressure the water exerts on you.  A standard Argo float would get crushed by the water pressure if it went much deeper than 2000 m. Therefore, a new float design was needed to dive all the way to the ocean floor (6000 m). Some design modifications aimed to better perform in high pressure environments include floats with spherical shapes and   hulls made  of glass, since such shape and  material can stand much higher pressure, when compared with cylindrical floats made of aluminum.  The CTD sensor on the float, responsible for the temperature, salinity and pressure measurements, also needed to be redesigned to preserve its integrity and the accuracy of the measurements, which were also affected by the pressure. To learn more about the challenges facing Deep Argo, click here.

One of the reasons for Argo’s success has been the stability and accuracy of the CTD sensor on core Argo floats. This success makes the Argo float a desirable platform to add other sensors to measure more parameters in the world ocean. To that end, several different sensors have been developed to measure different biogeochemical (BGC) parameters on board of Argo. The first ones successfully integrated to the floats were  oxygen sensors, which  remain the most mature of the BGC sensors.  There are also pH, nitrate, chlorophyll-a, backscattering and irradiance sensors in use on BGC floats.  To learn more about BGC Argo and the sensors involved, click here.

SOCCOM BGC Argo floats getting prepped in the float lab.