Why do we need Argo?

We are increasingly concerned about global climate change and its regional impacts. Sea level is rising at an accelerating rate of 3 mm/year, Arctic sea ice cover is shrinking and high latitude areas are warming rapidly. Extreme weather events cause loss of life and enormous burdens on the insurance industry. Globally, 9 of the 10 warmest years since 1880, when instrumental records began, were in the 21st century.

These effects are caused by a mixture of long-term climate change and natural variability. Their impacts are in some cases beneficial (lengthened growing seasons, opening of Arctic shipping routes) and in others adverse (increased coastal flooding, severe droughts, more extreme and frequent heat waves and weather events such as severe tropical cyclones).

Understanding (and eventually predicting) changes in both the atmosphere and ocean are needed to guide international actions, to optimize governments’ policies and to shape industrial strategies. To make those predictions we need improved models of climate and of the entire earth system (including socio-economic factors).

Lack of sustained observations of the atmosphere, oceans and land have hindered the development and validation of climate models. An example from an analysis done prior to Argo concluded that the currents transporting heat northwards in the Atlantic and influencing western European climate had weakened by 30% in the past decade. This result had to be based on just five research measurements spread over 40 years. Was this change part of a trend that might lead to a major change in the Atlantic circulation, or due to natural variability that will reverse in the future, or is it an artifact of the limited observations?

In 1999, to combat this lack of data, an innovative step was taken by scientists to greatly improve the collection of observations inside the ocean through increased sampling of old and new quantities and increased coverage in terms of time and area.

That step was Argo.

The design of the Argo array is based on experience from the present observing system, on knowledge of variability from altimeter data, and on requirements for climate and high-resolution ocean models.  As technological advancements have been made, Argo has now expanded its original spatial design to include marginal seas, sea-ice zones, and measuring all the way to the ocean floor.  In addition, there are new sensors that measure biogeochemical parameters and deeper depths.  Several papers have been written describing the array designs, starting with the initial one and moving towards the current Argo2020 array design.

The new array design, Argo2020, is global, full depth and multidisciplinary.  In the future, when fully realized, the Argo array will contain 4000 floats of which 1200 are Deep Argo and 1000 are Biogeochemical Argo (BGC Argo).  All floats combined will provide 100,000+ temperature/salinity (T/S) profiles and velocity measurements per year distributed over the global oceans at an average 3-degree spacing.  At the moment, these expansions are described, but not yet fully implemented.  BGC Argo and Deep Argo are in pilot array phases. 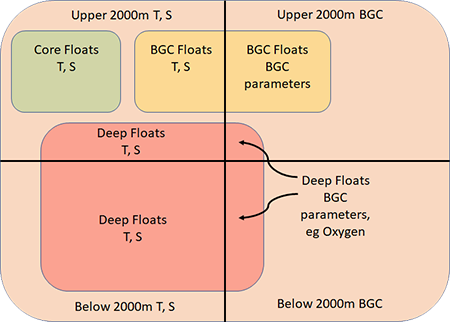