What Is Polar Argo?

Polar Argo refers to the subset of Argo floats operating in ice-covered areas south of 60°S and north of 60°N. Although these regions were not included in the original Argo design, floats have been deployed there since the early stages of the program, with the first floats deployed as early as 1999 and 2001, poleward of 60°S and 60°N, respectively.

The main advantage of using Argo floats in the high-latitude oceans is that they are able to sample autonomously throughout the winter, a season that is drastically undersampled by research vessels due to the widespread sea ice coverage and the harsh weather conditions. Argo has considerably improved our ability to observe the full seasonal cycles of the physical processes in the Polar oceans. Up to 2015, Argo floats in the Southern ocean had collected almost 40000 profiles, from which about 50% were winter profiles (April to September). In contrast, from the approximately 14,000 ship-born profiles acquired along a century of traditional shipborne oceanographic sampling (1900-2013), only 20% were winter profiles.

As of June 2020, 52142 profiles have been collected north of 60°N and 61420 south of 60°S, by 693 and 1026 different floats, respectively, from which 86 and 216 were currently active. The self-updating map below, provided by the Argo Information Center, shows the last location of the operational Polar Argo floats.

The presence of sea ice, however, represents a hazard for the integrity of the floats and prevents their communication with satellites, which is necessary for data transmission and the determination of the profiles positions. Klatt et al. (2007) reported that from the standard floats deployed in the seasonal ice region of the Weddell Sea (Southern Ocean), only a few were able to survive the winter season, once they have encountered ice. The authors estimated a probability of survival of about 40% under these conditions and attributed the high mortality to physical damage to the antennas inflicted by the sea ice. This could occur during float transmission, a process that required long periods at the surface since the floats were using the System Argo (see more in Technological innovations and Telecommunications systems), giving enough time for the float to be crushed between ice floes, or while hitting the ice from below when attempting to surface. Since the early days, the survival rates of floats operating in the high latitudes has increased and is now comparable with those of the floats operating in lower latitudes, thanks to many adaptations tailored to improve their performance in these icy environments. Such adaptations include:

The figure below, shows the schematics of the typical under-ice operation of an Argo-float. To learn more about the continuous work of the Argo community to overcome all the technical challenges associated with float operation under the ice, click here. 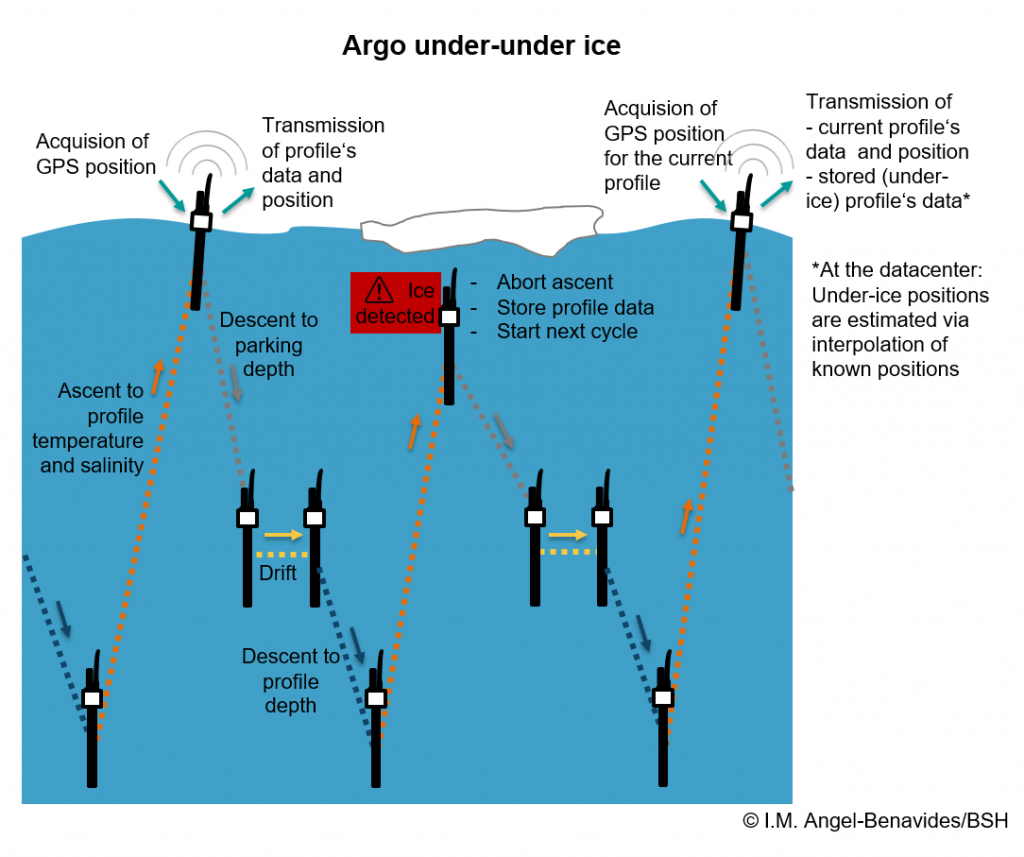 The animations below show the positions of the Polar Argo profiles between 2011 and 2019. The under-ice profiles are those with a satellite-derived sea ice concentration higher than 10%. For each profile, the sea ice information was extracted from the closest pixel in the corresponding daily sea ice concentration image from the Satellite Application Facility on Ocean and Sea Ice (OSI-SAF). It is important to notice, that the positions of the under-ice profiles were estimated via interpolation, since satellite positioning is impossible if the float does not reach the surface.

Please click on maps nearby to start the animations showing the increasing number of Argo profiles in the polar regions.

The recent progress in the Northern Hemisphere has been possible thanks to pilot projects aiming to study specific processes in the Arctic region. For example, the Stratified Ocean Dynamics in the Arctic and the Arctic Heat Open Science Project made aerial deployments of ALAMO floats in the Beaufort Gyre and the Chukchi Sea possible, and the GREEN EDGE research project, designed to study the dynamics of the phytoplankton spring bloom, kick-started the use of biogeochemical PROICE floats in the Baffin Bay. In the Southern hemisphere, the largest initiative is the Southern Ocean Carbon and Climate Observations and Modeling (SOCCOM), which aims to understand the region’s role on climate change and biogeochemistry processes. For more about these projects visit the Polar Argo Pilot Arrays page.

Keep in mind that the Argo network floats are just a part of the larger array of instruments and platforms necessary to observe the Polar Regions appropriately. In the multi-year ice environments of the Arctic proper, for example, ice tethered profilers are a more suitable alternative. For a list of pages related to Polar oceanography click here.

Our community is happy to assist countries and institutions interested in deploy floats in the polar oceans. Please visit the Polar Argo Contacts page to find the right people for your scientific purposes and region of interest.