Many flavors of Argo floats were recently deployed in a remote part of the global ocean by the new Australian research vessel, RV Investigator. On her first long deep hydrographic campaign, Investigator was occupying the GO-SHIP P15S line, which goes from the edge of the Antarctic sea ice to the equator along the 170W meridian. This line has been previously occupied

in 1990 by the RV Baldridge (USA), 1996 by the NOAA ship Discoverer (1996), 2001 by the RV Franklin (Australia), 2009 by the RV Southern Surveyor (Australia). These repeats are building up a picture of deep ocean change, including how the carbon and nutrient distributions in the oceans are evolving. The high accuracy of the temperature, salinity and nutrient profiles collected from the vessels are the ultimate benchmark for measurements made from autonomous platforms, such as Argo floats. This, along with its remote location, made the P15S occupation an ideal opportunity to deploy Argo floats, particularly those piloting new sensors and missions.

The Argo community joined together to take full advantage of the P15S opportunity. The aft laboratory was literally filled with floats of various types when it left Hobart. In total 43 profilers were deployed:

Floats were deployed on leaving a completed station or during transit. At each SOCCOM float deployment CTD, samples were collected for pH sample for depths to 2000m. Samples were collected at surface and subsurface chlorophyll maximum, and through the water column for analysis to calibrate the optical instruments.

Deep SOLO floats were deployed in the Southwest Pacific Basin, to augment a small pilot array of deep floats operating there. A video can be seen below of a Deep SOLO deployment. The float is lowered into the ocean in a degradable cardboard box held together by dissolving tape. When the tape dissolves, the harmless box separates and frees the Deep SOLO float to begin its mission.

P15S was also used to help progress the development of a CTD for the deep Argo mission. Two prototype SBE-61 internally recording CTDs were attached to the CTD frame above the ship’s SBE 9plus intakes. The SBE’s were on for all 140 CTD casts, and survived a sea floor crash on station 83 due to a winch brake failure. The data will be returned for analysis by SeaBird Electronics, Seattle.

The interaction of the Argo and GO-SHIP programs on the P15S voyage is an example of the strong interdependencies and synergies between these two very different approaches to global deep ocean observing.

Thanks to the Marine National Facility staff and crew of the RV Investigator for their support during this voyage. 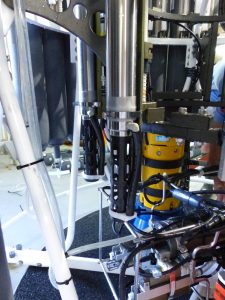 Two prototype SBE61 CTDs mounted to the frame (both are above the SBE 9plus CTD on the frame) for testing and development for use in the Deep Argo program. 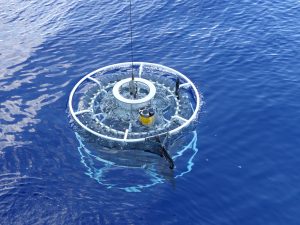 CTD in the ocean 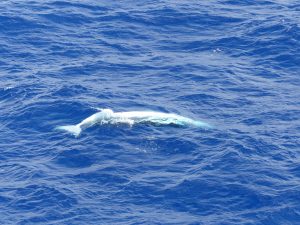 Videos from the RV Investigator