The new Version 3.0 and higher meta files are now available on the Argo GDACs to accommodate the increasingly complex missions that Argo floats are now performing, sometimes with multiple sensors.

With more than half of floats deployed in 2013 employing two-way communication systems, it is becoming more likely that a float may change its mission during its lifetime. To record the mission the float performs for each cycle, the CONFIG_MISSION_NUMBER variable is used in the META, PROF, and TRAJ files.

Many Argo floats do not change their configuration for the entire life of the float. Each cycle is repeated with the same configuration as the previous one.

Users are able to determine which mission applies to each cycle by looking at the CONFIG_MISSION_NUMBER variable in the PROF and TRAJ files. 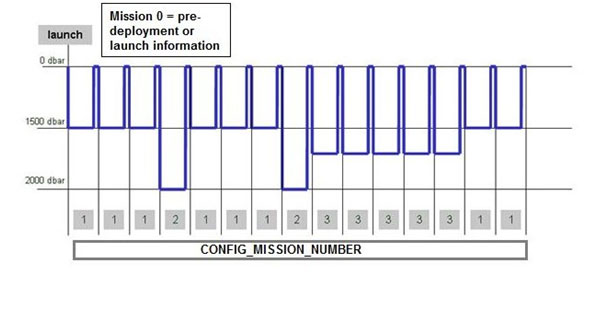 In the example, there are 3 different float behaviors to record, (with park depth varying between 1500, 2000 and 1700 dbar). Each of these new behaviors requires a new mission number. This is in addition to the pre-deployment or launch information:

There are also floats carrying additional sensors measuring temperature, salinity, and biogeochemical parameters. The meta file now contains information informing the user which sensor is measuring which parameter. The N_SENSOR dimension informs the user how many sensors are mounted on the float and the PARAMETER_SENSOR variable indicates which sensor is measuring which parameter. For example, CTD_PRES, OXYGEN_OPTOPE. There are additions variables describing the units, accuracy and resolution for each parameter.