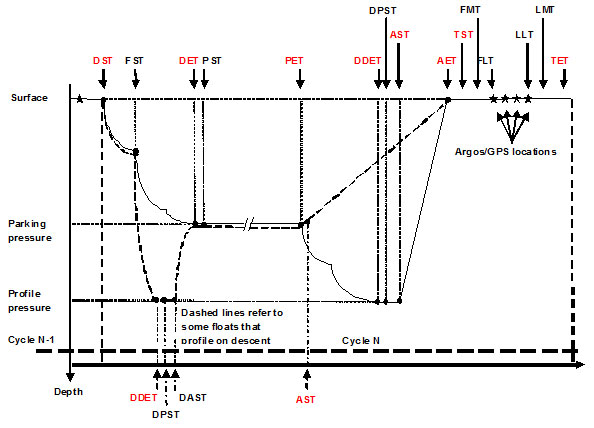 Each Argo float cycle is composed of programmed events. Depending on float type, some of these events can be dated and associated CTD measurements can be provided. The figure to the left shows an example cycle, with the events arranged in the order they will likely occur for Argos satellite communications. For Iridium floats, the order of surface events is different because upon arrival at the surface, the float first obtains a GPS position and then begins communicating with the Iridium satellite system rather than first communicating with the Argos satellite system and then obtaining positions.

The figure shows float cycle and the cycle timing variables with primary and mandatory ones in red. Floats can profile either on descent or ascent. Most floats profile on ascent. Their path is shown with a solid black line. Some floats profile on descent as shown by the dashed line.

Floats that profile on ascent would have the following primary & mandatory cycle timings:

Floats that profile on descent might have the following cycle timings:

Examples of this include:

PDF version of this information is available here.