The Australian Prime Minister, the Hon Julia Gillard, has been introduced to Argo during a January 16 briefing from Argo co-Chair, CSIRO’s Susan Wijffels, during a tour of CSIRO facilities by the Australian leader.

Ms Gillard ventured to the Hobart waterfront home of CSIRO Marine and Atmospheric Research where she toured the CSIRO research vessel, Southern Surveyor, was briefed by Susan and colleague Tim Lynch on deep-ocean and coastal moorings, gliders and Argo, and inspected the site of the new Institute for Marine and Antarctic Studies ( http://www.utas.edu.au/tools/recent-news/news/prime-minister-inspects-waterfront-site )

Susan said the visit provided an opportunity to explain to the Australian Prime Minister the significant advances Argo has made in just a decade, and outline the contribution Australia makes to the global program.

Argo has also had some profile on the other side of Australia with completion of a specialised deployment mission in the Indian Ocean from the crew of the Lady Amber. The 20 metre South African yacht was chartered by CSIRO to deploy 55 Argo profilers, and was met by the Western Australian Science Minister, the Hon John Day, ( http://www.mediastatements.wa.gov.au/Pages/WACabinetMinistersSearch.aspx?ItemId=147448&minister=Day&admin=Barnett ) on arrival in Fremantle in an activity coordinated by the Intergovernmental Oceanographic Commission, the Bureau of Meteorology and CSIRO. http://au.news.yahoo.com/thewest/a/-/wa/12581872/wild-ocean-journey-all-for-the-good-of-science/ 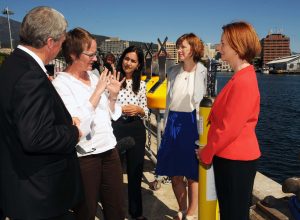