Argo is an international program to collect information on temperature, salinity, pressure, and biogeochemical components such as oxygen, pH, nitrates, chlorophyll, etc. of the world’s oceans. Argo uses robotic floats that spend most of their life drifting below the ocean surface. They make the temperature, salinity, pressure and biogeochemical measurements when they come up to the surface and after transmitting their data to satellites, they return to depth to drift for 10 days.  Currently, there are roughly 4000 floats producing 100,000+ temperature/salinity profiles per year.  The core floats go as deep as 2000 m and the Deep Argo Mission floats go all the way down to 6000 m.  The BioGeoChemical Argo (BGC-Argo) Pilot floats measure six additional parameters that help to understand and manage the ocean’s resources.  To learn more, visit the “About Argo” page.

In Greek mythology, Argo was the ship in which Jason and the Argonauts set sail to search for the golden fleece. Argo floats sail the 21st century seas and Argo is teamed with a satellite called JASON-1 that measures the shape of the ocean surface.  Data from Argo and JASON-1 together monitor the ocean currents, the oceans’ transport of heat and freshwater around the globe and sea-level rise.

*  What do the floats look like and how do they work?

The floats have a pressure case made of aluminium that is about 1.3m long and about 20cm diameter.   They weigh about 40kg.  On the top is an antenna to communicate with the satellites that fix the float’s position and receive the data. Also on the top are the temperature, salinity and pressure sensors.  At the bottom of the float in a protective cover is a bladder that is connected to the inside of the float.  The floats are designed so that with the bladder empty they have the same density as seawater at the depth at which they drift.  They are also designed to be less compressible than sea water.  This keeps them stable at depth. The floats are put in the ocean from ships or aircraft and sink to depth.  After 10 days, oil is pumped out of the float into the external bladder.  The float then becomes less dense than the surrounding water which drives the float to the surface.  At the surface, it obtains it’s position via satellites and downloads its data profile. It can also receive new mission instructions when it connects to the satellite. The bladder then deflates, the oil goes back into the float making it heavier than the surrounding water, and it sinks back to depth to repeat the cycle. To learn more, visit the “How Argo Floats Work” page.

*  How are the floats powered and how long do they work for?

The floats are powered by batteries.  Some use manganese/alkali batteries like you can buy in shops, but most floats that are deployed now use higher-powered lithium batteries.  The floats are designed to do about 150 cycles and so should last 3 – 5 years. The lifetime depends on the depth to which they profile and the surface water density in which the float is operating. (If the surface water has low density, more oil must be pumped to drive the float to the surface). To see plots on float lifetimes, go the the Argo Information Centre.

Argo data are used by weather and climate centers to help understand the way the oceans affect climate.  These centers are working to improve forecasts of El Nino events and to understand other climate features like monsoons and global warming. Argo is the main source of subsurface temperature and salinity from the deep oceans. See the “Argo and the modeling community” page for more details on the operational uses of Argo data. In addition, many researchers use Argo data to help better understand fundamentals about the ocean.  To learn more about Argo and the warming ocean and changing water cycle, click here.  To learn more about Argo’s impact on understanding some other global phenomenon like sea level rise, ocean heat content, ocean circulation and more, click here.

*  Where can you get the data and how much does it cost?

The most important thing about Argo data is that it is FREE to anyone wishing to use it.  The data can be obtained from two global data servers, one in France and one in the USA. There are also gridded products based on Argo data which may be more appropriate for some scientists.  If you’re interested in seeing Argo data without having to download it to your computer, there are the various Argo visualizations.  There are also ways to incorporate Argo data into your classroom.  To learn more about the various ways to access Argo data, visit the “How to access Argo data” page.

*  How accurate is the Argo data?

The temperatures in the Argo profiles are accurate to ± 0.002°C and pressures are accurate to ± 2.4dbar. For salinity,there are two answers. The data delivered in real time are sometimes affected by sensor drift. For many floats, this drift is small, and the uncorrected salinities are accurate to ± .01 psu. At a later stage, salinities are corrected by expert examination, comparing older floats with newly deployed instruments and with ship-based data. Corrections are made both for identified sensor drift and for a thermal lag error, which can result when the float ascends through a region of strong temperature gradients. Following this delayed-mode correction, salinity errors are usually reduced further and in most cases the data become good enough to detect subtle ocean change. The estimated accuracy of the delayed mode quality controlled salinity can be found in the PSAL_ADJUSTED_ERROR fields in the D profile files. If the salinity is found to be questionable even after delayed mode adjustment, there error and the qc flag are adjusted to higher than usual to make users aware of this.

Therefore, users should use the *_ADJUSTED_ERROR and *_ADJUSTED_QC fields in the profile files to filter the data set to remove less accurate measurements. This goes for all the parameters measured. While the temperature and pressure sensors are highly accurate, they may still have errors, leading to higher adjusted error fields and qc flags. In general, data that are considered bad and unadjustable are marked with a qc flag of ‘3’ or ‘4’. These bad data should not be used in any scientific applications.

To learn more about the quality of Argo data and some of the known issues, read through the “DATA FAQ” page.

To learn more about how to get started using Argo profile files, read the “Quick start guide“.

*  How much does the project cost and who pays?

Each float costs about $20,000 USD and this cost about doubles when the cost of deploying the float, handling the data and running the project is taken into account.  The array has roughly 3800 floats and each float provides a profile of temperature and salinity every 10 days. The Program collects about 140,000 profiles a year at a cost of around $200 per profile. 28 countries have contributed floats to the array with the USA providing about half the floats.

*  When will the Argo array be complete?

The Argo array reached it’s original design target of 3000 floats in November 2007, and can be maintained at that level as long as national commitments provide about 600 floats per year. As technologies have evolved, so has the Argo array design which has expanded to include marginal seas and sea-ice regions in the high latitudes.  Additionally, there are two new Argo missions:  the Deep Argo mission and the BioGeoChemical Argo (BGC-Argo) mission.  The Deep Argo mission goal is cover the entire water column from the ocean surface to its bottom depth of 6000m.  The BGC-Argo mission is to help manage the ocean’s resources.  Both of these missions are in the pilot stage meaning they have clear scientific objectives and array design, the technology is being tested and improved and there is an implementation plan. The need for global Argo observations will continue indefinitely, though the technologies and design of the array will evolve as better instruments are built, models are improved and more is learned about ocean variability.  To learn more about the new array design and further extensions, click here.

* How many BGC Argo and Deep Argo floats are there?

The Argo Information Centre publishes monthly maps with the number of active floats in the Argo array.  The “network” map shows the number of active core, BGC, and Deep floats.  Click here for the entire map collection and move through the maps using the arrows or select ‘Argo Networks’ from the drop down menu in the upper left hand corner. 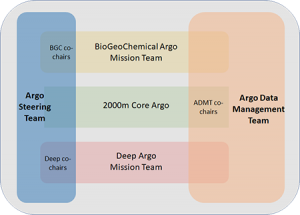 Argo has an international Steering Team and a Data Management Team made up of scientists from countries involved in Argo. An Argo Technical Coordinator monitors the array and registers each float deployment in accordance with international agreements. Argo also has an international Director. Each country finds its own funding and sets its own priorities for where floats are deployed in consultation with other countries.  To learn more about the governance structure and organization, click here.

*  What happens when floats stop working?

Most floats will “die” when the battery is too weak to pump the float to the surface.  These floats will drift around in the deep ocean until the pressure case corrodes, water leaks in, and the float falls to the sea bed.  Over time on the ocean floor, the aluminum hull will slowly degrade into harmless oxides which will be spread around by the ocean’s currents. The material inside, including plastics and metals, will slowly decompose over time.  See the “Environmental impact” page for more information on the float’s end of life.  However a small number will wash up on the beach or, vary rarely, be caught in nets.  Floats have labels (in many languages) on them telling the finder, what to do with the float.

*  Do the floats pose any hazard to people, wildlife, the environment or shipping?

The floats make no noise in the ocean and they do not contain materials that are not found elsewhere in the oceans.  We take care to ensure that they are handled properly if they are found by fishermen or beachcombers.  They are small and light enough to pose no significant hazard to ships and boats. 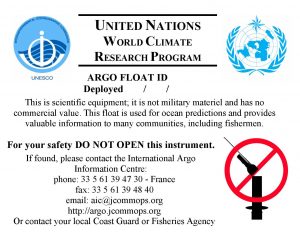 In the rare case that a float is found on a beach we can learn a great deal from it about why it failed. First look for the float’s identification.  The float should have a label (shown here at right) with instructions in many languages.
If you can safely do so, move the float to a location where it can be stored without getting too hot and where it cannot be interfered with by other people.
Follow the instructions on the label and inform the Argo Information Centre in France (by e-mailbelbeoch@jcommops.org, Fax +33 5 61 75 10 14 or telephone +33 5 61 39 47 30)  giving information on the float identification numbers, where and when the float was found and where it is stored.  If this is not possible please ask the local police or coast guard to contact Argo. Arrangements will then be made to return the float to its owner.

*  What if I have questions about Argo or the data?