The expansion of the Argo array towards the poles involves three main challenges due to the presence of sea ice. Sea ice is a hazard to the floats integrity and it prevents the transmission of the data in real time via satellite, as well as the acquisition of GPS position for the under-ice profiles. In this section, we describe how the Argo community has met these challenges, allowing the successful operation of the Argo floats in the seasonal ice zones.

Nowadays the life expectancy of the Argo floats operating poleward of 60° latitudes is only slightly lower compared with those operating in lower latitudes. In contrast, Argo floats encountering ice in the early 2000s had a considerably lower life expectancy with approximately 40% achieving 100 cycles and just 15% reaching 200 cycles. This occurred because a standard Argo float that encounters ice on top while ascending to the surface would hit the ice repeatedly trying to reach the surface, resulting in damage in the sensors and antenna and a shortened lifetime. This was compounded by long surface times due to the slow transmission speed provided by the ARGOS technology. Iridium APEX ice floats (mostly deployed since 2010) have very good survivability and lifetimes, with 90% achieving 120-200 cycles (comparable to regular floats). The mortality rate went from about 50% in the 2000s to 20% in the last 5 years for the Southern Ocean, similar to that observed in the Atlantic, while it fluctuates around 30% in the Arctic. Such improvement is the result of a wide range of operation strategies and technological improvements that allow the floats to avoid contact with sea ice and withstand occasional encounters with it.

The selection of strategies to prevent damage induced by ice is a complex task because there is always a trade-off between maximizing the float lifetimes, by avoiding the surface excessively to avoid sea ice, and maximizing the number of profiles with GPS position and transmitted in real time, by trying to surface too often and risking hitting the ice. Moreover, the available options depend on many variables such as float manufacturer, float type, science objectives, operation region, local hydrography and sea ice seasonal cycle, etc. Some of these strategies are summarized below.

One approach is to prevent the float from hitting the ice from below by “sensing” the presence of sea ice during its ascending trajectory and, if ice is detected, return to the parking position without surfacing. Some groups have tested dedicated sensors for this purpose, such as upward looking altimeters and optical sensors, but the most widely used approach is to use the CTD data collected during ascent to predict the presence of sea ice. The latter approach is cost-neutral and is implemented as ice sensing algorithms on various float types. For more details about the Ice Sensing Algorithms visit the Technological innovations page. 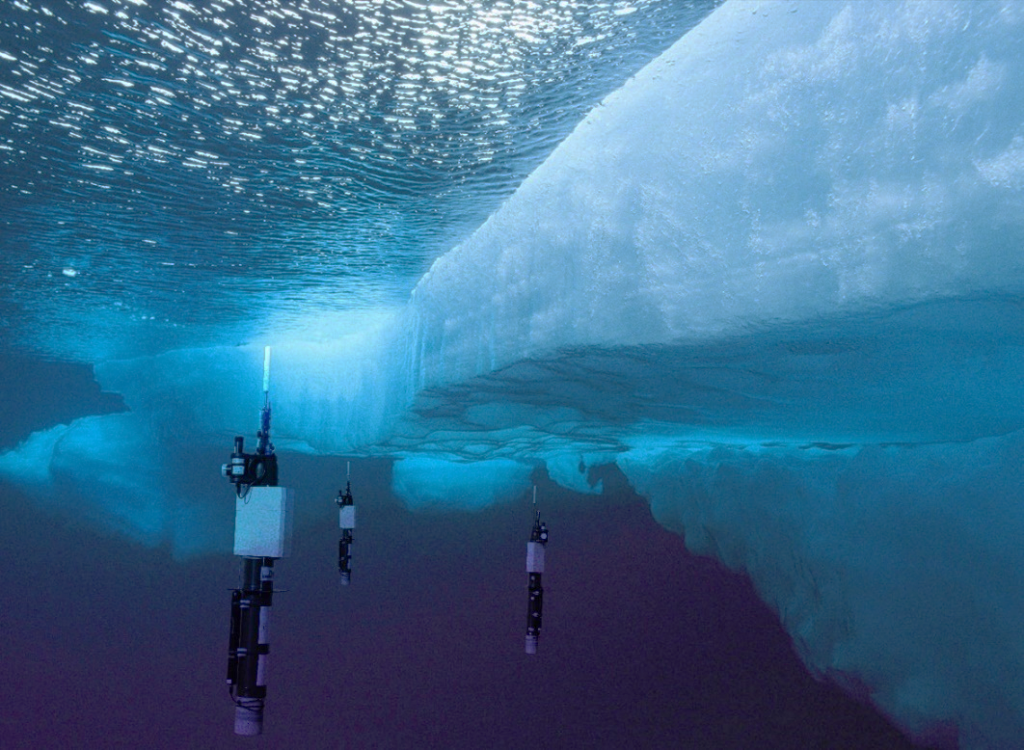 The PROICE floats in the Baffin Bay (more here) use a more conservative approach for ice avoidance, taking advantage of their operation in an enclosed basin. They use the ice sensing approach only during the melting and ice forming periods, but avoid any surfacing attempt during the periods when complete ice coverage is expected. This strategy is known as ice calendar, and has worked effectively protecting these expensive biogeochemical floats.

Moreover, to avoid shocks from occasional contact with the ice, while at the surface surrounded by ice floes or in case of failure of the ice avoidance strategy, some floats have an additional cage at the top to protect the CTD and strengthened antennas. The risk of damage while transmitting data on the surface has also decreased because modern floats equipped with Iridium and GPS antennas spend considerably less time at the surface (less than one hour) than floats equipped with ARGOS (up to 12 h). Iridium’s two-way communication also allows modifications to the ice avoidance strategies during the float lifetime. For more about telecommunication systems click here.

Although ice avoidance via ice sensing is the most popular strategy, some Polar Argo floats have been programmed to increase their chance of surfacing. An example are SOLO (Sounding Oceanographic Lagrangian Observer) floats deployed by WHOI, designed to withstand collision with the ice during ascent, by means of a ruggedized antenna. Their aim is to find leads on the ice, by repeatedly trying to surface after each profile.

Since Argo floats communicate with the data centers via satellite while at the surface, the under ice profiles cannot be transmitted immediately after being measured. Therefore, the ability to store profiles internally is essential for the operation of Argo floats in the seasonal ice zones. Moreover, due to the limited storage capacity, sometimes is necessary to adjust the mission parameters and sampling schemes to guarantee that there will be enough memory for the entire ice season, thus avoiding information loss.

When the sea ice first melts in spring the float surfaces and telemeters all of the stored under-ice profiles from the previous winter period. However, these profiles lack satellite positioning. A challenge for the community is how to best estimate float positions when the float is under ice. The default practice is to assign a position by interpolate linearly between known positions, obtained before and after the under-ice period. Aiming to increase the accuracy of the estimated positions, two other solutions have been successfully applied in the continental shelves of the Southern Ocean. One solution uses the Ranging and Fixing of Sound (RAFOS) technology to acoustically track the Argo floats underwater position in the Weddell Sea (Klatt et al., 2007). In this case, an array of acoustic moorings, maintained by the Alfred-Wegner Institute in Germany, emits acoustic signals with a range of approx. 500 km, which are in turn received by RAFOS antennas installed in the Argo floats. By analyzing the acoustic signals received by the floats, their position can be calculated in post processing. 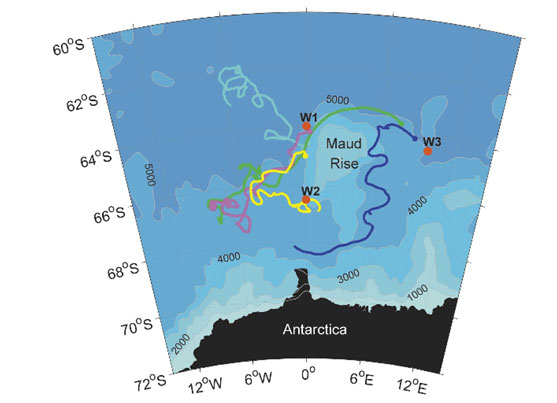 Trajectories of five acoustically-tracked RAFOS floats at 750m depth in the Weddell Sea between December 2002 and February 2004, (figure from Klatt et al., 2007)

Another approach, tested in the continental shelf near Adélie Land (East Antarctica) is to use the knowledge of the underwater topography to constrain the interpolation used for estimating the profile’s positions (Wallace et al., 2020). This bathymetry-constrained navigation requires that the floats are programmed to park at the bottom, thus obtaining a measurement of the water depth between profiles. In this way, the possible positions for the under ice profiles are reduced to those with a local bottom depth that matches the measured bottom depths, effectively increasing the accuracy of the estimated positions. 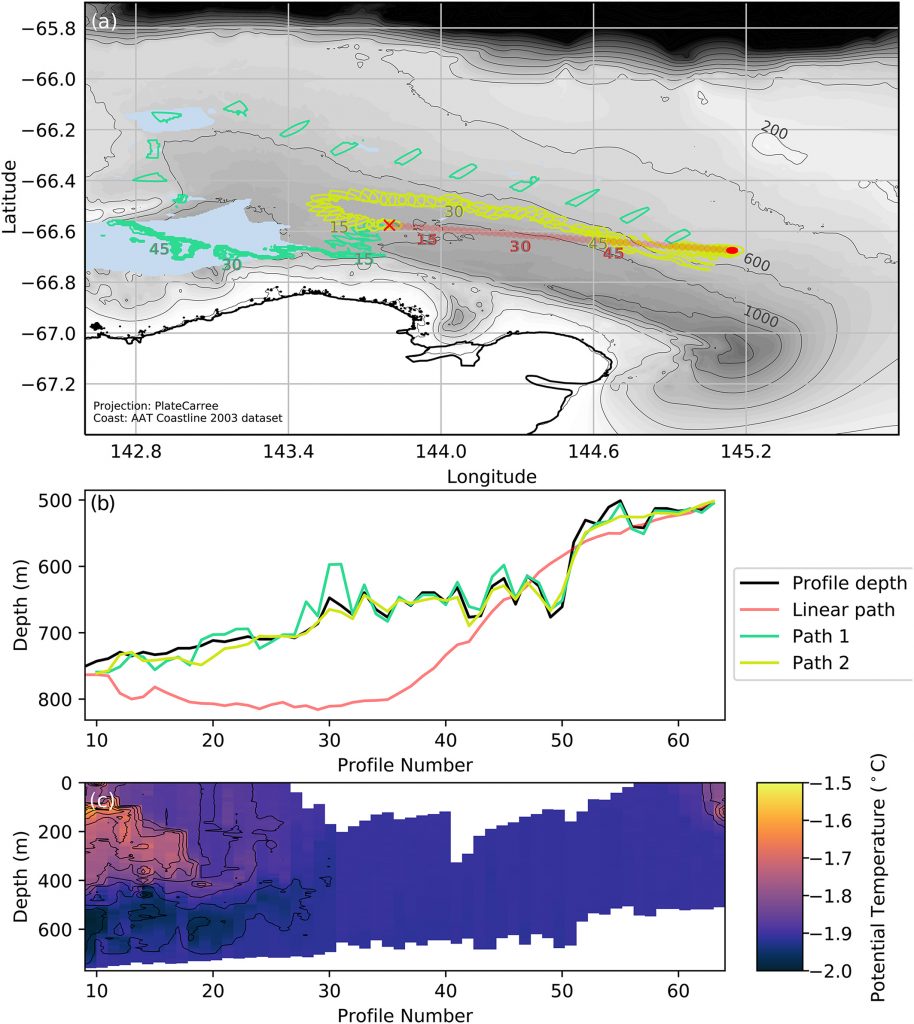 (a) Algorithm‐derived paths for the under‐ice period for float 7900331 between Profiles 9 (red cross) and 64 (red circle), selected profiles labeled: red = linear interpolation; yellow = depth constraint; green = iceberg and depth constraints. Iceberg mask (blue shading) digitized from satellite imagery. (b) Depth from Beaman et al. (2010) bathymetry at the location of each profile for each float path; black = depth measured by the float. (c) Potential temperature measured by the float. The float was under an iceberg(s) between Profiles 26 and 54. Posted with permission from https://doi.org/10.1029/2020GL087019